I have visited Portugal a number of times, mainly on unsuccessful skydiving trips. Who would have thought that having Europe’s largest on-shore wind farm nearby would indicate winds would stop play on a daily basis?! As a result, we have stumbled through the back roads of smalls towns such as Alvor, eating at local restaurants that catch the eye. Many times, if we were not eating the catch of the day, then we would opt for the National Dish - Peri Peri chicken.

The marinade is a fiery red colour, and is almost as hot to taste. Unfortunately, I could not get hold of the correct chillies to make this authentically, so was forced to substitute some scotch bonnets and red thai chillies to give a hot fruity taste. The peri peri chilli pepper is a little hotter than a red thai chilli and has a more punchy flavour.

The basis of most peri peri recipes is red pepper, chilli, oil, paprika and citrus. A number of people that I asked about the recipe came up with an assortment of family-secret additional flavours. The one that most stood out to me was a glass of whisky.

I have searched on the internet, and there seems to be numerous schools of thought on the use of whisky. Some flame the whisky when making the marinade, and others blitz all the ingredients together.

For this attempt, I chose to keep the marinade raw.

This recipe is ideal for a BBQ - the smoky flavour would really help to lift the dish and make it authentic. However, cooking on a Monday evening - the oven is far more convenient. I cooked the chicken on low for 45 minutes and then gave it a blast under the grill to caramelise the top.

The chicken was delicious and moist, the marinade hot and spicy and the meal a great success - bringing back fond memories of warm evenings in the Med. 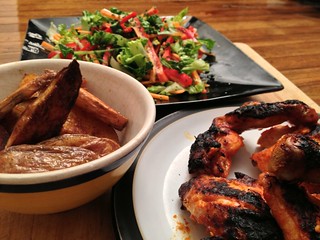 Humus is a great side dish for BBQs, buffets or just served on its own with some delicious homemade flatbread.

This is a very quick recipe, dispensing with the need to soak chickpeas 24 hours before you want to eat them. Occasionally, I have been known to be sufficiently organised to plan ahead and get the preparation done. However, it is rare, so I fallback on cooked, canned chickpeas.

I think this recipe tastes pretty damn good - definitely better than the bland supermarket versions. (I concede that there are some fabulous delicatessen variations of humus about these days that are extremely good.)

The humus was originally served with Chicken Shish Taouk. The garlicky humus worked beautifully with the zingy moist coated chicken. 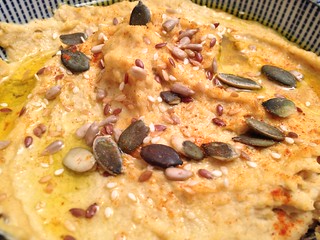